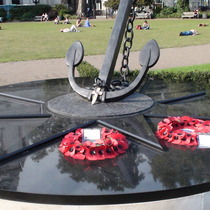 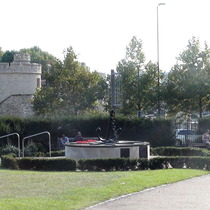 {On the central one of three bronze plaques on the base:}
In memory of those merchant seafarers who gave their lives to secure the freedom of the Falkland Islands, 1982.

{The other two plaques carry the names of the 17 Merchant Navy and RFA casualties and their ships. For the list see 'Subjects commemorated'.}

{At the centre of the top, just in front of the anchor:}
Time & distance
{and then, faintly scratched:}
Designer Gordon W. Newton, Maidstone, 2005

RFA stands for Royal Fleet Auxiliary which is a civilian-manned fleet, owned by the MOD, which supports Royal Navy ships.

This section lists the subjects commemorated on the memorial on this page:
Falklands War memorial

This section lists the subjects who helped to create/erect the memorial on this page:
Falklands War memorial