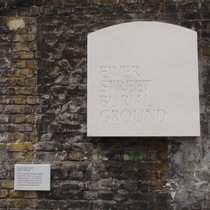 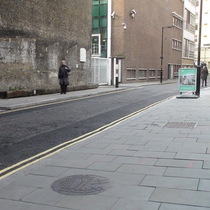 {On the small information board:}
Site of Ewer Street burial ground
1674 - 1762 Part of Quaker meeting house. 1776 - 1814 In the grounds of Baptist Church. c.1861 Unearthed during the building of Charing Cross railway. 1987 Bones and skulls from hundreds of bodies rediscovered.

Current maps show Ewer Street shaped like a T on its side - very unusual. An 1862 map shows an L-shaped Ewer Street (without the northern branch), immediately to the north of the railway, whereas currently the east-west section is to the south of the line. All a good indication of the disruption brought by the railway.

The railway line must have used the land occupied by the east-west section of Ewer Street and by the buildings, and burial ground, on its southern side. And a replacement means of travelling east-west was provided by creating a new Ewer Street alongside the line, on the south.

We are pleased to have found the Quaker Meeting House on a map. Presumably the Baptist Church occupied the same site, possibly the same building, and we are disappointed not to have found a picture of it.

This section lists the subjects commemorated on the memorial on this page:
Ewer Street burial ground

St Saviour's Southwark has some good reports describing this burial ground at...

This section lists the other memorials at the same location as the memorial on this page:
Ewer Street burial ground

We found each of these civilian casualties in the CWGC database and the make ...

Unveiled as part of Westminster's 50th anniversary commemorations marking the...

Herbert Peter Cazaly, stationer’s clerk, who was drowned at Kew in endeavouri...