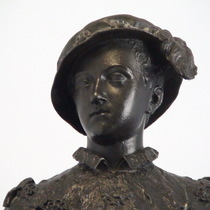 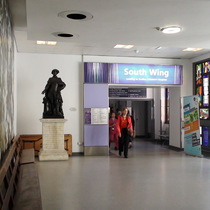 {On the front of the plinth:}
This statue of King Edward the sixth, a most excellent prince of exemplary piety and wisdom above his years, the glory and ornament of his age and most munificent founder of this hospital, was erected at the expense of Charles Joye Esquire, the late worthy Treasurer thereof, by the appointment of his will in the year MDCCXXXVII.
Edward VI statue at St Thomas's - Scheemaker

{The back of the plinth carries the same inscription in Latin.}

Low on the left side of the statue:}
P. Scheemakers, Fecit

First erected in the second of St Thomas’s three courts, shown in a drawing here. In 1841 the block separating the first two courts was demolished and in 1847 this statue was erected at the centre of this new court, shown in this lithograph. The hospital moved to Southwark in 1871 and here the statue was first set up in the gardens overlooking Lambeth Palace Road. c.1907 it was moved to back the Thames. In WW2, it was left to brave the bombs, until a near miss in 1940 when it was put into storage. In 1951 it was displayed at the Festival of Britain. By 1955 it was back at the hospital in the Riverside colonnade. It was then briefly relocated to a riverside loggia, and then, c. 1970, all statues were put into storage while the hospital was rebuilt. 1976 the king, together with other statues, was erected on the North Wing terrace, ready for the official opening. 1997 this statue was moved inside the North Wing, to its current position.

Along this corridor are a number of lovely large Doulton panels depicting nursery rhymes, presumably saved when a children's ward was demolished. Central Hall, to the right of our photo contains a statue of Queen Victoria and many busts, we didn't count but perhaps 15.

There is another statue of this king, outside this hospital.

This section lists the subjects commemorated on the memorial on this page:
Edward VI statue at St Thomas's - Scheemaker

This section lists the subjects who helped to create/erect the memorial on this page:
Edward VI statue at St Thomas's - Scheemaker

Treasurer and a governor of Guys Hospital and of St Thomas's Hospital. At Guy...

Erected to commemorate the Trafalgar victory over Napoleon of 1805. The heigh...