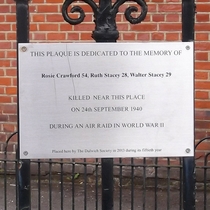 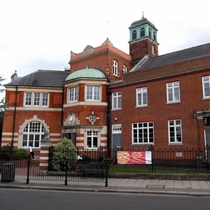 This plaque is dedicated to the memory of Rosie Crawford 54, Ruth Stacey 28, Walter Stacey 29, killed near this place on 24th September 1940 during an air raid in World War II.
Placed here by the Dulwich Society in 2013 during its fiftieth year.

Researching these three names Andrew Behan comments: "Ruth Stacey and Walter Stacey were married to each other and lived next door to Rosie Crawford. It would appear that their ages shown on the plaque were probably derived from either the Register of WWII Civilian Deaths for the Metropolitan Borough of Camberwell or from the Civil Registration Death Index complied from the records held at the General Register Office in London. However the actual dates of birth shown on the 1939 England and Wales Register for all three people and on the baptismal record for Rosie Crawford, would seem to show that two of the ages on the plaque are incorrect. Rosie Crawford was 55 years old when she died and Ruth Stacey was aged 29 years. It would also appear that the surname of Stacey was sometimes spelt as Stacy on various records, but I have used the surname spelling as Stacey to compile a history of the man."

The plaque is on the railings below the lower window on the right of our photograph.

This section lists the subjects commemorated on the memorial on this page:
Dulwich Library air raid

This section lists the subjects who helped to create/erect the memorial on this page:
Dulwich Library air raid

"Our objects are to create the sense of community that one would hope to find...