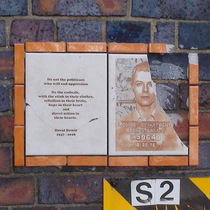 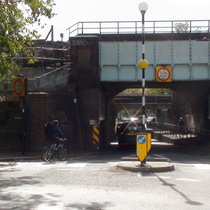 In March 1976 Bowie was arrested in a downtown Rochester hotel after performing at the Community War Memorial. He and three others were charged with marijuana possession. In May the charges were effectively dropped.

Searching Google Street View, this memorial was erected sometime in 2016 after Bowie's death in January and before July.

This section lists the subjects commemorated on the memorial on this page:
David Bowie tiles