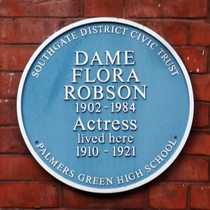 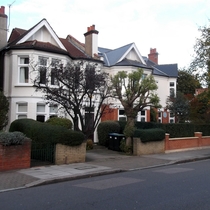 Unveiled by girls studying drama at Palmers Green High School, Flora's old school. From Enfield: "Flora Robson moved with her family from South Shields to 76 Devonshire Road in Palmers Green in 1907, when she was nearly five, before living at The Lawe from 1910 to 1921. Flora attended Palmers Green High School from the age of 13, and went on in 1919 to the [Royal] Academy of Dramatic Art, of which she later became President."

We thank our colleague, Alan Patient, for collecting our photos.

This section lists the subjects commemorated on the memorial on this page:
Dame Flora Robson - N14

This section lists the subjects who helped to create/erect the memorial on this page:
Dame Flora Robson - N14

Founded in response to the threat to demolish the Georgian cottages on Southg...

{Surrounding the Epsom and Ewell Borough arms with the motto 'None Such':}193...

Note the very correct use of apostrophes