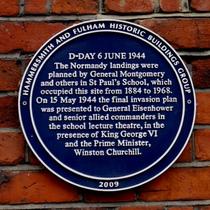 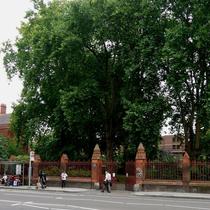 Hammersmith and Fulham Historic Buildings Group
D-Day 6 June 1944, the Normandy landings were planned by General Montgomery and others in St Paul's School, which occupied this site from 1884 to 1968. On 15 May 1944, the final invasion plan was presented to General Eisenhower and senior allied commanders in the school lecture theatre, in the presence of King George VI and the Prime Minister, Winston Churchill.
2009.

The boundary wall and gate pillars and the Highmaster's House are all that remain of St Paul's School buildings.

The redbrick, very ornamental, Highmaster's House was used as a location in the 1971 film S.W.A.L.K. though most of the shots show the southern facade. 2016: it is now used as St Paul's Hotel.

This section lists the subjects commemorated on the memorial on this page:
D-Day

This section lists the subjects who helped to create/erect the memorial on this page:
D-Day

Founded to focus attention on the historic environment of the borough and to ...

To commemorate the gift of this wall fountain by the Master, wardens, assista...

Yes, they've mis-spelt the name of their own road.