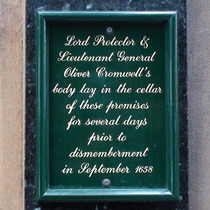 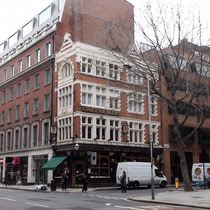 Lord Protector & Lieutenant General Oliver Cromwell's body lay in the cellar of these premises for several days prior to dismemberment in September 1658.

The plaque gives the date of Cromwell's death rather than the date of his exhumation, three years later. And the fact of the dismemberment is not certain but there definitely is a story that Cromwell's body, with two others, lay in an Inn of this name in the area now called Red Lion Square, prior to being taken to Tyburn for a posthumous execution. Only a very dodgy taxi driver would travel from Westminster Abbey to Tyburn (now Marble Arch) via Red Lion Square, so the story is pretty doubtful. Others think that perhaps the bodies, post-posthumous execution, were discarded in a pit at the Square rather than at a Tyburn pit. So, all in all, a rather doubtful piece of history. And people ask why we don't always collect pub plaques!

This section lists the subjects commemorated on the memorial on this page:
Cromwell's body