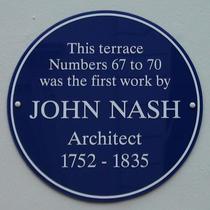 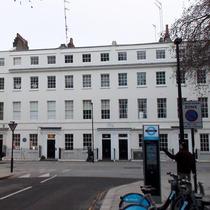 Our photograph shows the whole four-house terrace.  From the ODNB:  These houses were built 1777-8, among the first houses in London to be stucco-clad.  Nash lived in one of them from 1778 to about 1782, during which time his wife went to Wales, was unfaithful and they ended up in court.  Meanwhile the other houses failed to sell and Nash went bankrupt.  So Great Russell Street was probably not one of his favourite places.

See also the English Heritage plaque on the same terrace.

This section lists the subjects commemorated on the memorial on this page:
John Nash terrace - WC1 - not EH

This plaque is written in classical Armenian and that's all we can tell you a...

In a house on this site lived Gregory de Rokesley, eight times Mayor of Londo...

IanVisits's post about these almshouses in March 2011 pictured another plaque...