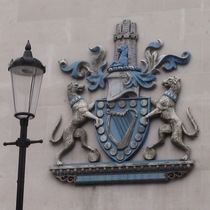 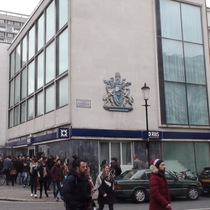 Probably erected with the building in the 1960s.

The building is now occupied by RBS but this crest is not, nor ever was, their logo. Trouble was we couldn't identify it, though it looked very familiar. It's a quality piece of old-school street art and, we guessed, speaks of the original use of the building, but we could find no history of the site.

We spent some time searching heraldry sites using the image and learnt that the two dogs are probably described as "talbot supporters" but when we found ourselves on the website for Port Talbot football team's supporters we gave up.

2016: Even Dave Walker, the RBKC local history buff at the excellent Library Time Machine described it as "a bit of a mystery".

2017: In response to our query a comment was posted on the Library Time Machine's site which solved the mystery - thanks A. J. P. Crown. With that information we found The 1960s Clearing Banks where this crest (actually just the shield part) is identified as that of the National Bank Ltd.

This section lists the subjects commemorated on the memorial on this page:
Crest - National Bank Ltd