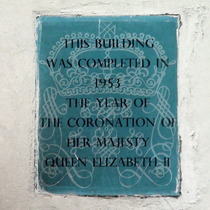 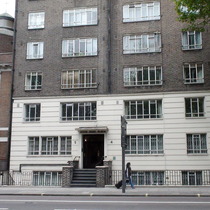 This building was completed in 1953, the year of the coronation of Her Majesty Queen Elizabeth II.

We really like this unusual plaque - so of its time with its calligraphic decorations. In the background curlicues you can clearly see a crown and surely the side squiggles represent the regal locks of hair?

We got excited when we found a picture at Prints On-line: “5, Hyde Park Place, London - Home of Dickens - the last London residence of the writer Charles Dickens (January 1870). From a series of cards depicting places connected to the life of the writer Charles Dickens (6 of 6).”  Seems he rented this house for the first 6 months of 1870 as a London base, but he kept the Gads Hill home which is where he died.

However that 5 Hyde Park Place is almost certainly not the same site as our block of flats, since between at least 1830 and I878 ‘Hyde Park Place’ described a short section of what is now Marble Arch/Oxford Street, running from Edgware Road to Old Quebec  Street.    Our building is on what was during that time known as Connaught Place.  So this block of flats was not built on the site of a Dickens home.  Sorry.

This section lists the subjects commemorated on the memorial on this page:
Coronation building