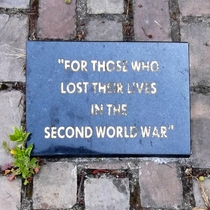 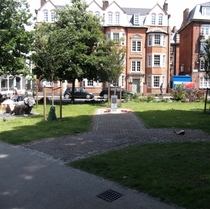 "For those who lost their lives in the second world war".

This plaque is on the right-hand fork of the path close to the Camberwell Green air-raid memorial. It is unusually wide in its scope of commemoration. Most war memorials are either to a number of named individuals or to a group - the neighbouring memorial to the wedding party being an example of both types. But this lone plaque seems to encompass everyone, everywhere, who died in WW2. The inscription is in quotes and we wonder if perhaps it used to part of something larger which would have given it context. Given its location we have chosen to read it as referring just to the people of Camberwell.

This section lists the subjects commemorated on the memorial on this page:
Victims of WW2

people of Camberwell who died or suffered in war

We think the commemoration refers only to WW2, but it's unclear.

This section lists the other memorials at the same location as the memorial on this page:
Victims of WW2

{Plaque on the upright element:} In memory of the people of Camberwell who di...