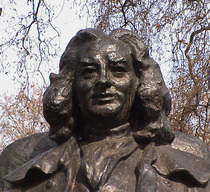 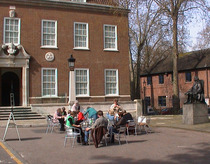 {Engraved on the front face:}
Thomas Coram, 1668 - 1751, Pioneer in the cause of child welfare.
{On a plaque on the rear face:}
Thomas Coram was born at Lyne Regis, Dorset in 1668 He became a Captain in the Merchant Navy trading between England and America. For several years he lived in America as a shipwright gaining a great reputation as an expert on all matters concerning the Colonies. As a staunch churchman he realised the importance of the spiritual needs of the settlers and left land in trust for the building of a church in Taunton Massachusetts. He became a Younger Brother of Trinity House and a trustee of the Colony of Georgia and settled in London in 1720. Here, in 1739, he established the Foundling Hospital for which a Royal Charter was obtained. He died in 1751 and his
body now rests in the Church of Saint Andrew, Holborn. The great pioneer work begun by Captain Coram is under the name of the Thomas Coram Foundation for Children. This statue was erected by the Governors in 1963.

The bust is above the front door of the museum. Further up, above the window is a plaque with:
T
FH
RG
1937
which we think means that the building was erected in 1937 during the office of a Treasurer of the charity with initials RG.

More interestingly, on the railings behind the statue there is a Tracey Emin sculpture.

Ornamental Passions tells us the architect was  J. M. Sheppard and Partners.

This section lists the subjects commemorated on the memorial on this page:
Coram statue

This section lists the subjects who helped to create/erect the memorial on this page:
Coram statue

This section lists the other memorials at the same location as the memorial on this page:
Coram statue

A 1908 article in the New York Times nicely describes the king as being in "i...