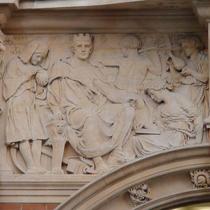 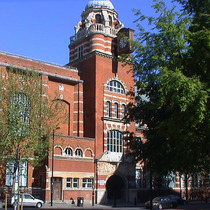 This lovely frieze which represents the "Useful Arts", runs across above the main entrance to the building. On either side cherubs present musical instruments and masks, representing the arts of music and drama. In the section to the right of the arch there is a semi-naked woman (representing fertility, possibly) surrounded by a shepherd, a cornucopia of fruit, a peasant carrying an armful of wheat, and another reaching for an arrow to put in his bow while his dog fidgets to be off.

On the left hand side we have this scene, a central medieval king-like person, who has wedged a handy anchor under his throne. To his right there is a young man measuring a globe with a pair of dividers. Behind the king's head an angel is presenting a dome, the dome of this building. To the king's left we have a lad wielding a pick-axe and another holding a flask. A girl sits at his feet stydying a book. The angel-with-dome scene seems to represent the gift of this building.

We were initially puzzled about the king.  Who was he and why is he here?  Via Twitter, Stephen Critchley suggested Alfred the Great and when we checked we found that he died almost exactly 1000 years before this building was erected, and, as Wikipedia says “undertook an ... ambitious effort to revive learning”, just like the Northampton Institute.  We’re delighted that Stephen has solved the puzzle.

The land, and possibly the building too, was given by the 4th Marquess of Northampton and his son.  Founded in 1894 as the Northampton Institute on its present site and awarded full university status in 1966. The Institute's first building was designed in 1894 by the architect Edward W Mountford (1855-1908), later the architect of the Old Bailey.

This section lists the subjects commemorated on the memorial on this page:
City University

This section lists the subjects who helped to create/erect the memorial on this page:
City University

This carving depicts the two Brontë sisters meeting Thackeray, but rather fai...