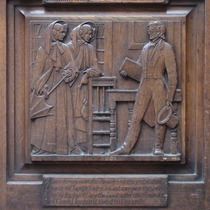 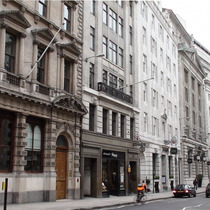 Thackeray, Charlotte and Anne Brontë at the publishing house of Smith, Elder & Co. Cowper the poet, Gray the poet, Guy the bookseller and founder of Guy’s Hospital, lived in Cornhill.

This carving depicts the two Brontë sisters meeting Thackeray, but rather fails to successfully render his specs. Charlotte did indeed meet Thackeray, her literary hero, also published by Smith, in November 1849 but it was at a dinner party given by George Smith.

The carved doors are at the right of the building, behind the cyclist in our picture.  According to Esoteric London these panels, listed here in reading sequence (left right, top down), "were designed by the sculptor Walter Gilbert in 1939. Gilbert modelled each of the reliefs in clay and from this the two mahogany doors were carved by B. P. Arnold at H. H. Martyn & Co. Ltd of Cheltenham 'architectural decorators and furnishers'."

This section lists the subjects commemorated on the memorial on this page:
CI - 8 - Books

This section lists the subjects who helped to create/erect the memorial on this page:
CI - 8 - Books

This section lists the other memorials at the same location as the memorial on this page:
CI - 8 - Books