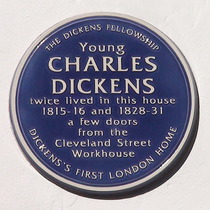 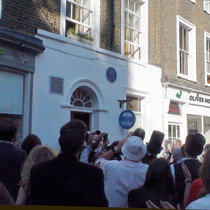 Unveiled by Lucinda Dickens Hawksley.  Behind this plaque is an interesting detective story, related in Dr Ruth Richardson's book: 'Dickens and the Workhouse'.  It was only through Ruth's diligent researches that the closeness of this Dickens' home to a workhouse was realised.  This fact led to the recognition that the Cleveland Street Workhouse was probably, at least in part, the inspiration for Oliver Twist's workhouse and thus that Workhouse was awarded listing status, saving it from imminent demolition.  The power of history!

From the unveiling publicity: "This modest Georgian house, previously No. 10 Norfolk Street, Marylebone, was Dickens's first home in London. His family lodged there, above a grocer's shop, for almost five years of his childhood and adolescence. Only a few doors from the former Cleveland Street Workhouse."

We took our pictures at the unveiling, which, as you can tell from the hats in the photo, was attended by a few Dickensian characters.

This section lists the subjects commemorated on the memorial on this page:
Charles Dickens - W1

This section lists the subjects who helped to create/erect the memorial on this page:
Charles Dickens - W1