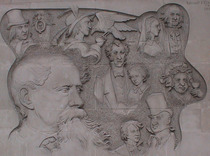 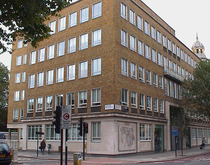 {On a plaque above the relief:}
While living in a house on this site Charles Dickens wrote six of his principal works. Characters from which appear in this sculptured panel.

The characters represented in the mural are, left to right, top line: Scrooge, (the head with the door knocker represents Marley's ghost) Barnaby Rudge, Little Nell and Granddad, middle line: Dombey and daughter, Mrs. Gamp, bottom line: David Copperfield, Mr. Micawber. And the large head is Dickens's own. Thanks to Margaret Beer for the identifications.

Dickens lived in 1 Devonshire Terrace, the house on this site, 1839 - 1851. In the late 50s it was demolished and replaced with this office block, incorporating this sculpture in memory of Dickens and all the characters he created here. The keystone from Dickens home here is held at the Dickens Museum. Also see Ornamental Passions.

This section lists the subjects commemorated on the memorial on this page:
Charles Dickens relief

One of Charles Dickens characters from David Copperfield (1850).

Two of Charles Dickens characters from Dombey and Son (1848).

One of Charles Dickens' characters from Martin Chuzzlewit.

This section lists the subjects who helped to create/erect the memorial on this page:
Charles Dickens relief

Member of the Royal Academy (known as Jim), a noted sculptor, especially in w...

{On the ribbon wrapped around the milk churn:}Dairy Supply Co Limited