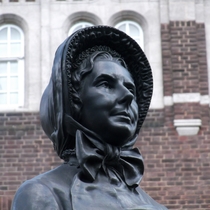 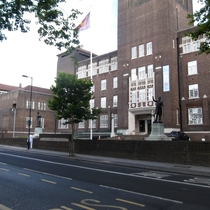 {Base of statue:} Geo. Wade. Sculptor

As consultant architect Sir Giles Gilbert Scott designed the elevations and the interior of the hall and specified the materials but the rest was by Gordon and Viner. It opened in 1929 to train members of the Salvation Army and also holds the Army's library, archives and International Heritage Centre. This building fulfilled William Booth's vision of a "University of Humanity".

This section lists the subjects commemorated on the memorial on this page:
Catherine Booth statue - Denmark Hill

This section lists the subjects who helped to create/erect the memorial on this page:
Catherine Booth statue - Denmark Hill

This section lists the other memorials at the same location as the memorial on this page:
Catherine Booth statue - Denmark Hill