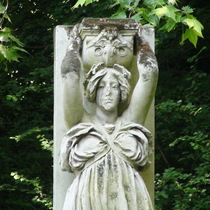 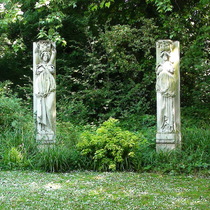 The Caryatides of Rotherhithe Old Town Hall
Designed and constructed {* see our note below} by Henry Poole RA and opened on April 28th 1897, the Town Hall was sited on the corner of Neptune Street and Lower Road, with the rear of the building on Moodkee Street. These caryatides originally flanked the main entrance of the old Rotherhithe Town Hall, which in 1905 was converted into a library. The building was severely damaged by the German air raids of the second world war and subsequently demolished. the caryatides remained on their original site until 1974 when they were relocated within the Heygate Estate just off the New Kent Road. In 2009 the caryatides were removed when demolition of the estate commenced, and located back here in Rotherhithe in 2011.

About the Caryatides
Caryatides are a Greek architectural support in the form of a female figure which replaces the column or pillar. The significant differences between the two caryatides is one is detailed with oak and the other laurel. Oak is often seen as an emblem of virtue, strength, resiliency, longevity and rebirth. Laurel is a token of peace and quiet but also a symbol of triumph and fame.

* Note: Poole was not an architect, he designed and created these caryatides, not the building, which was the work of Murray and Foster.

This section lists the subjects commemorated on the memorial on this page:
Caryatid - left

This section lists the subjects who helped to create/erect the memorial on this page:
Caryatid - left

This section lists the other memorials at the same location as the memorial on this page:
Caryatid - left

{Bronze plaque on the low plinth:}Ridirich by Keith McCarter {means Knight in...

Purchased by the Friends of the Children of Great Ormond Street Hospital in m...