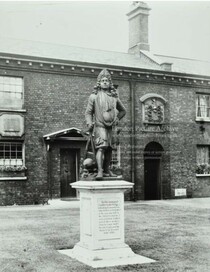 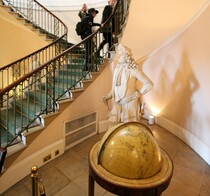 {On the front of the plinth:}
To the memory of Cap. Richard Maples (who dying Commander of a shipp in the East Indies in the year 1680, left to the Trinity House ye value of 1300L in which part of these Almes-houses were built) the said Corpn. caused this statue to be erected Anno 1680.

Our B&W photo is from London Picture Archive where it is captioned: "Trinity Almshouses, statue of Captain Richard Maples, removed from Deptford Almshouses, with almshouses in the background".  Spitalfields Life have another photo of the statue in the same place captioned "Capt Maples at Trinity Almshouse, Mile End Rd, c. 1920". Lost Hospitals tells of an additional forty almshouses being built in the second half of the 19th century behind the chapel, around another central green and the statue being placed there.

This statue has lived in 3 different homes and has been rather difficult to research with much certainty.

The dates vary depending on source but the journey is roughly: The statue was erected at the Deptford almshouses in 1680. When they closed (dates given range 1866-77) the statue was transferred to the Mile End almshouses. In WW2 it was moved to Trinity House where we understand it is now (2021) on display in the central stairway, as shown in the colour photograph, from Wikipedia.

English 18th Century Portrait Sculpture writes: "In 1681 Latham completed a statue in lead of Captain Richard Maples, a benefactor of Trinity House, for which he was paid £45. This was originally placed in the Trinity Almshouses at Deptford, but was moved in 1873 to the corporation’s almshouses in the Mile End Road and then to Trinity House itself during World War II. The imposing figure, originally posed on an inscribed pedestal, is presented in uniform with naval instruments at his feet. It was one of the first lead portrait statues in London and was painted to simulate stone."

Contradicting that, PPL write: "The bronze statue was created in 1683 by Jasper Latham and said to be the first lead encapsulated with Coade stone."

Maples' clothes have a rather eastern look so we were surprised to see Maples described as being "in uniform".  We couldn't find any images of 17th century British seafarers dressed like this, but then we found a "Portrait of a Dutch navigator" wearing almost exactly the same bizarre outfit.

The header picture at Trinity House shows a statue at the centre of the Mile End courtyard, in 1896. Surely that must be Maples. However this contradicts Lost Hospitals who say it was placed behind the chapel.

We have 'pinned' this statue to its last public location, but resisted the temptation to mark it as 'lost' since it is still in London and at a known location, though not on public view.

This section lists the subjects commemorated on the memorial on this page:
Captain Richard Maples

This section lists the subjects who helped to create/erect the memorial on this page:
Captain Richard Maples