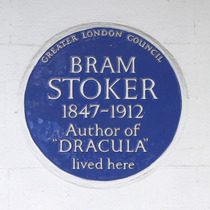 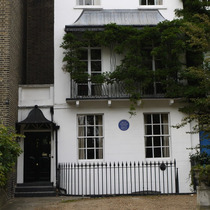 According to ever-informative The Library Time Machine, Stoker "... the house of Bram Stoker, the author of Dracula, not to mention the Lair of the White Worm which made a curious Ken Russell film, and the Jewel of Seven Stars which was turned into one of my favourite Hammer films, Blood from the Mummy’s Tomb. Stoker wrote both of those at number 18 where you can find a blue plaque, but wrote Dracula next door at number 17. He also lived in a house in Cheyne Walk ....".

This section lists the subjects commemorated on the memorial on this page:
Bram Stoker

This section lists the subjects who helped to create/erect the memorial on this page:
Bram Stoker

From: the Devere Society: "1598 October - In the only letter ever discovered ...