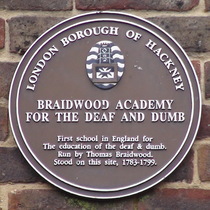 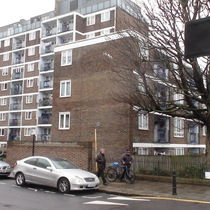 Braidwood Academy for the Deaf and Dumb, first school in England for the education of the deaf & dumb. Run by Thomas Braidwood. Stood on this site, 1783 - 1799.
London Borough of Hackney

The name of the house in which the school was housed started as Bowling Green House. It was changed to Grove House and then in 1799 to Pembroke House.

On old maps one can see a large house just a little to the north of the plaque locaton but we can find no photo, nor the date of demolition.

British History On-line has: "By 1697 Bowling Green House had been built south of Morning Lane, from which it was reached by converging ways along the lines of Chatham Place and Meeting House path; it was rebuilt c. 1762 and later called Grove House."

Studymore has: "Braidwood Academy ... in what became 36 Chatham Place, ... Braidwood took over the lease of a rebuilt Bowling Green House, a property occupied by one Dr Rawlinson, and renamed it Grove House."

This section lists the subjects commemorated on the memorial on this page:
Braidwood Academy

This section lists the subjects who helped to create/erect the memorial on this page:
Braidwood Academy

On this site stood the house Bell Moor where the historian of Hampstead, Thom...

{Around the logo of the Terrence Higgins Trust:}The first meeting of the Terr...