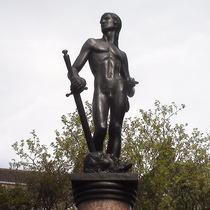 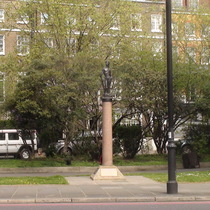 {The base of the monument has a modern plaque on each face. Starting at the south and moving anti-clockwise:}
The original Boy David statue sculptured in bronze by Francis Derwent Wood was the model for the Machine Gun Corps memorial which stands at Hyde Park Corner and was presented to the Borough of Chelsea in 1963 but was later stolen.
This bronze fibreglass replacement was erected by the Royal Borough of Kensington and Chelsea and the Old Comrades Association of the Machine Gun Corps.

The Boy David by Bainbridge Copnall MBE PPRBS. A memorial to the members of the Machine Gun Corps who served in World War One.

This bronze fibreglass statue was sculptured by E. Bainbridge Copnall, 1903 - 1973, and set on the granite column which the sculptor donated to the Royal Borough of Kensington and Chelsea.

Commissioned to create a WW1 memorial to the Machine Gun Corps Derwent Wood produced a statue of David (post-Goliath decapitation). The original half-size statue was given to Chelsea in 1963 and erected here but it was stolen in 1969. 2 years later Copnall created this fibreglass version as a replacement, adding Goliath's head. They are both a naked man with a giant sword but there the resemblance ends.

This one seems pretty safe, not only is it made of worthless fibreglass but it's at the top of a slippery granite column.

This section lists the subjects commemorated on the memorial on this page:
Boy David

This section lists the subjects who helped to create/erect the memorial on this page:
Boy David

Other work in London includes the Light and Sound reliefs on the Vue cinema i...