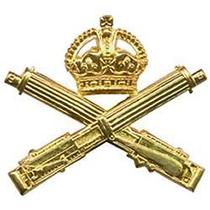 A corps of the British army. It was formed in response to the need for more effective use of machine guns on the Western Front in World War I. It had four branches (Infantry, Cavalry, Motor and Heavy). The heavy branch was the first to use land tanks in combat, and subsequently became the Tank Corps and later, the Royal Tank Regiment. At the end of the war, the corps saw service in other conflicts, before being disbanded as a cost-cutting measure.

The corps served in France, Flanders, Russia, Italy, Egypt, Palestine, Mesopotamia, Salonica, India, Afghanistan and East Africa.  The last unit of the Corps to be disbanded was the depot at Shorncliffe.  The total number who served in the Corps was some 11,500 officers, and 159,000 other ranks of whom 1,120 officers and 12,671 other ranks were killed and 2,881 officers and 45,377 other ranks were wounded, missing or prisoners of war. That casualty rate, about a third, was very high and justifies the Corps' nickname: the Suicide Squad.

This section lists the memorials where the subject on this page is commemorated:
Machine Gun Corps

The statue is of the boy David holding Goliath's sword (the clue is in the si...