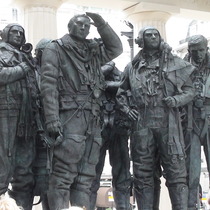 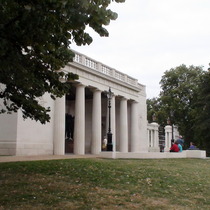 {Inside the pavilion, on the west end:}
The fighters are our salvation but the bombers alone provide the means of victory.  Winston Churchill. September 1940

{On the north side:}
This memorial also commemorates those of all nations who lost their lives in the bombing of 1939 - 1945.

{On the east end:}
This memorial is dedicated to the 55,573 airmen from the United Kingdom, British Commonwealth & allied nations who served in RAF Bomber Command & lost their lives over the course of the Second World War.

{Around the reveal of the large sky-light in the roof:}
Per Ardua ad Astra {Latin: 'Through adversity to the stars' - the motto of the RAF.}

{In the niche at the west end:}
This memorial was built with the generous support of the Lord Ashcroft, John Caudwell, Richard Desmond, James Dooley, Robin Gibb and the Heritage Foundation, the Bomber Command Association and the families and friends of those who died.  Ministers of the Crown, The Royal Air Force, The RAF Benevolent Fund, The RAF Museum, The Government of Canada / le Gouvernement de Canada, The Governments of Australia and New Zealand, the Polish Air Force Association, le Ministere de la Defense et des Anciens Combattants - France, the Daily Telegraph Group, the Express Group and public donations from around the world.

{In the niche at the east end:}
The completion of this memorial was made possible by principle benefactor Lord Ashcroft, KCMG, May 2012.

{On the red granite statue plinth, at the front:}
HM Queen Elizabeth II unveiled this memorial 28 June, in the year of her Diamond Jubilee, 2012.

{at the back:}
Freedom is the sure possession of those alone who have the courage to defend it.  Pericles

{On the south face of the pavilion either side of the entrance:}
This stone was laid by John Caudwell, principal benefactor of this memorial, 8 March 2012.

This stone was laid by His Royal Highness the Duke of Gloucester, KG, GCVO on behalf of Marshal of the Royal Air Force, Sir Michael Beetham, GCB, CBE, DFC, AFC, President and {sic, we think this should read "of"} the Bomber Command Association, 4th May 2011.

The campaign to bomb civilians was so controversial that the bombers were given no specific medal or monument until this was erected, 65 years after the event. Note the rather unusual text declaring that the victims of the bombs are also commemorated by the memorial.

2021: The roof of this memorial is constructed from aluminium recovered from the crashed Halifax LW682/OW-M.  On 13 May 1944, this plane was on its way, with 119 other aircraft, to bomb the railyards at Louvain, Belgium, but it was shot down by the Luftwaffe, and crashed into a bog at Schendelbeke. All eight crew members were killed. The difficult terrain delayed recovery until 1997. Aluminium recovered from the crash site was melted down into ingots and is being used in a number of appropriate memorials. See Look Out Navy News for more information.

This memorial has been controversial in all sorts of ways. First the dubious ethics of the bombing raids meant that some felt there should be no memorial at all. Then there were protests that the site chosen necessitated the chopping down of a number of trees. Since the unveiling the monument has been popular but the artistic reviews have not been complimentary; criticising not just the fact of its traditionalism and classicism but also the quality of the architectural design.

This section lists the subjects commemorated on the memorial on this page:
Bomber Command Memorial

This section lists the subjects who helped to create/erect the memorial on this page:
Bomber Command Memorial

The equivalent of the UK Ministry of Defence has a special section, named in ...