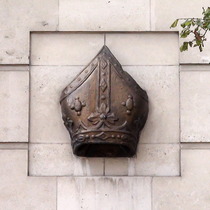 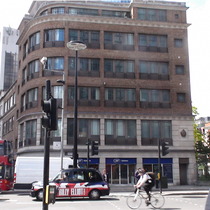 Unless we missed it, there is no blue plaque for Bishops Gate (nor for the river gates Billings and Dow), though we have found them for the gates of: Ald, New, Moor, Cripple, Lud and Alders.  But there is this bishop's mitre on the side of a building.  Robert Coleman of www.cultureseekers.org tells us that this mitre was one of a pair, but the other was lost so that the Heron Tower could be built, and has not returned.  He says “Where it should go is right where the sign is for the restaurant at the top of the Heron Tower, so if they do find the stone mitre and replace it, it won't go back to where it should be (marking the point where the gate used to be), which is missing the point.”

Nearby there is a modern information board, part of a series of installations from the Festival of Architecture 2010, to celebrate the sites of the old Gates of the City of London. It reads:

As one of the original Roman city gates, Bishopsgate followed the path of an old Roman road that went from the Basilica and Forum, out of what was then Londinium towards Lincoln and York.  In keeping with its origin, Bishopsgate was the starting place of many famous journeys, perhaps the most humorous of which was Will Kemp’s ‘Nine Days Wonder'.  William Kemp was an Elizabethan comic actor, who is commonly thought to have been the original Dogberry in Shakespeare's 'Much Ado About Nothing'.  In 1600, after he had been replaced as jester in 'The Chamberlains Men' acting troupe because of his chronic improvising, Kemp danced a Morris dance between Bishopsgate and Norwich as an act of self-publicity.  Kemp covered the distance of over one hundred miles in nine days (spread over a few weeks) and famously entered Norwich to the cheers of an adoring crowd.

This section lists the subjects commemorated on the memorial on this page:
Bishopsgate