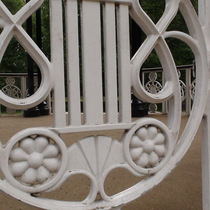 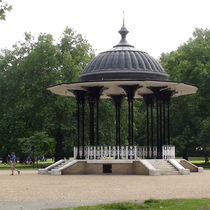 Francis Fowke designed the buildings for the 1862 International Exhibition in South Kensington and also some of the items in the neighbouring RHS Garden such as the conservatory and two band houses, as they were originally called. These cast-iron bandstands were the first erected in this country. The design was inspired by Indo-Islamic architecture and the roof, a wooden dome covered in zinc, wasn’t just to provide rain cover, it also acting as a sounding board to project the music out to the audience.

In 1888 when the RHS Garden vacated the South Ken site the LCC bought both of the bandstands. One was erected at Peckham Rye (see Arts and Culture for a photo) and was opened by the Earl of Meath on 13 July 1889. That same year some LCC minutes note that a previous smaller bandstand in Southwark Park was to be moved to Plumstead Common and replaced with one of the South Kensington bandstands. Maps suggest that a bandstand survived in Southwark Park until at least 1954 but had gone by 1968. Historic England says it was removed by 1947. It’s possibly that the ironwork was removed in WW2, along with many railings, for supposed reuse as armaments. In 1999 the bandstand was reconstructed using the original detailed drawings as part of a Heritage Lottery Funded restoration of the Park.

Note: an LCC minute of 1890 refers to a bandstand being erected on Clapham Common and that has often been taken (by British History Online no less) to refer to one of the Fowke bandstands. But it seems it is a modified replica. Arts and Culture have a photo if you wish to compare and contrast.

Our plumbing consultant points out that some of the columns are plumbed in to act as down-pipes for water off the roof. Clever.

From a nearby information board:
Southwark Park opened in 1869 without provision for public music. For the Victorians the park was more about nature and health, rather than entertainment. However the local community made it clear they would like to hear music in their park, and by 1878 the Crown Brass Band was given permission to play on Saturdays. The Band, composed of working men from George M. Hammer and Co. Ltd’s factory in Bermondsey, performed on a small stage of their own making.

In 1883 a permanent wooden bandstand was installed before being relocated to Plumstead Common. It was replaced in 1889 by a fine iron structure, designed by the architect Captain Francis Fowke (1823 – 1865). The London County Council bought that bandstand from the Great International Exhibition in South Kensington at the instigation of local representative, Lawrence Stevens. It served Southwark Park for many years as a venue for concerts, dances, public meetings and even open-air school classes. In the late 1950s Fowke’s distinguished work was replaced by a functional, rectangular bandstand, which was eventually removed without replacement for many years. In 1999 the Heritage Lottery Fund awarded a grant for the restoration of historic features in Southwark Park, resulting in this replica of Fowke's bandstand, which you see today.

The accompanying photos show the rectangular bandstand, actually a stage with a proscenium arch.

This section lists the subjects commemorated on the memorial on this page:
Bandstand - Southwark Park

Under the direction of Prince Albert the profits of the 1851 Great Exhibition...

Firm of furniture makers, such as school desks and park benches. From London ...

The Park was created mainly from market gardens. Alexander McKenzie, the land...

This section lists the subjects who helped to create/erect the memorial on this page:
Bandstand - Southwark Park

Engineer and architect, and a Captain in the Corps of Royal Engineers.  Born...

Builder and local politician. Born Stratford to a father with the same name a...

In memory of Arnold and Verna Rosen, good citizens and Fabians.