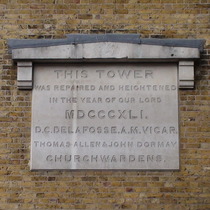 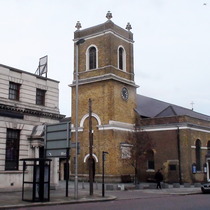 This tower was repaired and heightened in the year of our Lord MDCCCXLI. {1841}
D. C. Delafosse, A.M. - Vicar
Thomas Allen & John Dormay - Churchwardens.

The Church of England has this to say about this church:
Built: 17th - 19th centuries, Architect: William Jupp, Listing: grade 2*.  All Saints Church stands on the site of an earlier church, dating from the thirteenth century, in a central position in the original village of Wandsworth. The river Wandle is close by to the east, a few hundred yards from where it flows into the River Thames.
The lower parts of the west tower were built in 1630, the upper storey an addition in 1841 when the peal of eight bells was installed. The north aisle was built in 1724 and the remainder rebuilt by William Jupp 1778-80. A new chancel, designed by E W Mountford was added in 1900.

This section lists the subjects commemorated on the memorial on this page:
All Saints Church tower

This section lists the subjects who helped to create/erect the memorial on this page:
All Saints Church tower

We really like this unusual plaque - so of its time with its calligraphic dec...