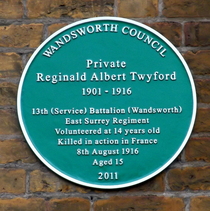 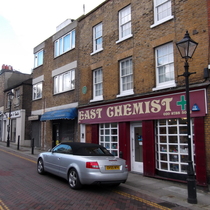 The plaque gives his first names as Reginald Albert in that order. However, his birth is registered as Albert Reginald. The 1901 census lists him as Albert, whilst in the 1911 census he appears as Reggie.

His address in the 1901 census is given as 8 Roehampton High Street, although as can be seen in the photograph, the plaque is located at number 16. Presumably, the street was later renumbered.

This section lists the subjects commemorated on the memorial on this page:
Albert Reginald Twyford

Soldier. At 14 years old, he managed to conceal his real age when he voluntee...

This section lists the subjects who helped to create/erect the memorial on this page:
Albert Reginald Twyford

The Tom Ossel Memorial GardenThis garden of peace is dedicated to the memory ...

At the top, below the badge for the City of London Artillery:}Their name live...