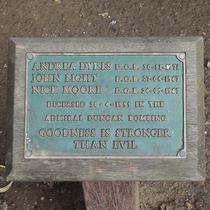 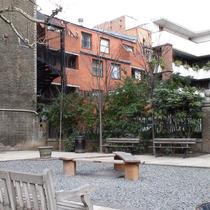 The gay pub, the Admiral Duncan, just north of this church, in Old Compton Street, was bombed in 1999. There were 3 deaths and 70 injured. Behind the triangular bench are three trees (variously described as maple or fruit), beside which the plaque is placed.

April 2013: The plaque had gone missing but it was quickly replaced in time for the 14th anniversary.  The new plaque has identical wording and is very similar to the old one, in colour and size, but we prefer the original so we are keeping that photo.

This section lists the subjects commemorated on the memorial on this page:
Admiral Duncan - 3 dead

This section lists the other memorials at the same location as the memorial on this page:
Admiral Duncan - 3 dead