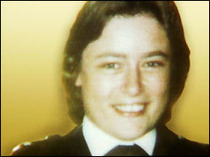 Semley, Wiltshire was the home of Yvonne Fletcher until she became a Police Constable in the Metropolitan Police. She was shot while on duty outside the Libyan Embassy in St James Square, London and died on the 17th April 1984. St Leonards church, Semley, contains a stained glass window in her memory which was designed by Henry Haig A.R.C.A. of Fifehead Magdalen in Dorset.
Some websites would have you believe that her death was a conspiracy, by whom and to what purpose we didn't stay to find out.

This section lists the memorials where the subject on this page is commemorated:
Yvonne Fletcher

Part of the Napoleonic Wars.  The British fought the French at Abu Qir in Egy...

In Britain, the term was originally applied to the conscription of men during...

The popular image of the navy in Nelson's time, is of ships manned solely by ...