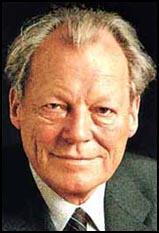 Politiican. Born as Herbert Ernst Karl Frahm in the Free City of Lübeck (German Empire). In 1933 he left Germany for Norway to escape Nazi persecution and adopted his new name to avoid detection. He worked in Spain as a journalist during the civil war. He returned to Germany after the war and joined the Social Democratic Party of Germany. Mayor of West Berlin from 1957 to 1966 and Chancellor of West Germany from 1969 to 1974. Awarded the Nobel peace prize in 1971. Died at his home in Unkel.

This section lists the memorials created by the subject on this page:
Willy Brandt

Hammersmith &amp; Fulham has been twinned with Neukolln (a borough of West Be...