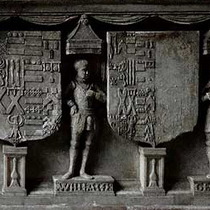 An important man in the court of Edward IV, rising to the position of Lord Chamberlain. On the king’s death he supported his brother, the later Richard III, but something was not to Richard’s liking and during a Council meeting at the Tower of London, he accused Hastings and others of plotting against him.  The others were imprisoned but Hastings was dragged outside and beheaded there and then, thus starting the charming tradition of beheadings on Tower Green.

This section lists the memorials where the subject on this page is commemorated:
William, Lord Hastings

Born a protestant in York but became a Catholic when his widowed mother marri...

men &women of Uxbridge persecuted in their Christian faith

Protestant martyr. He was believed to have been a Baptist, which was rather d...