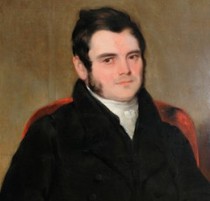 Born Suffolk. 1806 he enrolled in the Independent academy at Homerton, then 'near' London. 1812 converted from Calvinism to Unitarianism. 1817 called to the Unitarian, chapel in Parliament Court, Bishopsgate.  In February 1824 this moved to new premises known as the South Place Chapel. The married Fox suffered a breakdown in 1822 and formed a, to some, inappropriate relationship with a woman, Eliza Flower. Together with his advocacy for divorce on grounds of incompatibility this almost cost him his job as minister. His opponents left the congregation and Fox and Eliza set up home together. Some time after she died in 1846 he and his wife were reconciled. He entered politics and became an MP.  Died London.

This section lists the memorials where the subject on this page is commemorated:
William Johnson Fox

Churchwarden of St. Mary Aldenmary in 1872.