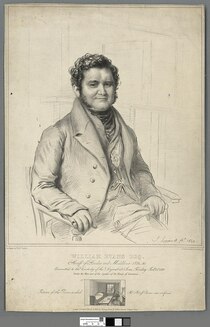 Businessman and Sheriff of London and Middlesex, 1839-40.

The image of Evans has a small drawing at the bottom captioned: "Interior of the room in which Mr Sheriff Evans was confined".  This set us hunting and we found the answer at Bonhams, who had sold a silver tray with an inscription referring to the confinement of Evans. The story starts with Hansard publishing something deemed indecent.  We can do no better than repeat Bonhams' explanation, as follows:

The inscription reads: Anno Domini 1840 Presented together with two ice vases to William Evans Esquire at the expiration of his year of office as one of the Sheriffs of London & Joint Sheriff of Middlesex. In testimony of the high approbation of the Subscribers of the conduct of himself, and his honourable colleague John Wheelton, Esquire, In preferring to endure a painful and protracted imprisonment rather than submit to the undefined and arbitrary privileges assumed by the house of commons. Whereby they were required to violate their oath of office, and disobey the Queen's writ which they had sworn to observe and to perpetuate the high sense of respect and admiration entertained by the Subscribers. Of the firmness and dignity displayed by the Sheriffs during their imprisonment in vindication of the majesty of the laws and the just liberty of the subject.

The above inscription relates to an interesting episode in legal history which resulted in a change to the laws regarding Parliamentary Privilege. The affair began in 1836 when the official parliamentary reporter Hansard published, by order of the House of Commons, a report in which the book On Diseases of the Generative System was described as indecent. The publisher of this book, John Joseph Stockdale, subsequently sued for defamation. The plea from Hansard was that they acted under the order of the House of Commons, and were therefore protected by Parliamentary Privilege which grants protection against civil or criminal liability for actions done or statements made in the course of legislative duties. The court dismissed this, ruling that while that may be the case within parliament, it offered no protection for publishing publically. Damages were assessed at £600. By order of the court William Evans as Sheriff of London took possession of Hanard's stock in trade and goods and organised their sale, the proceeds of which were placed in the Sheriff's hands before transferral to Stockdale. Pressure was put on Evans to return the money to Hansard by the House of Commons in an attempt to overrule the decision of the court. On Evans' refusal, he was committed to the custody of the Sergeant at Arms, described as guilty of contempt and breach of the privileges of the House. He was imprisoned for 44 days. As a result of the case parliament passed the Parliamentary Papers Act 1840 to establish privilege for publication under their authority.

This section lists the memorials where the subject on this page is commemorated:
William Evans

At about the time that Evans gave the land for these almshouses he was confin...

One of the Special Commissioners for the Great Exhibition 1851.

Son of Sir Francis Wyatt Truscott. A printer and a stationer. Knighted in 190...