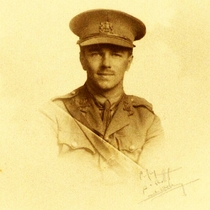 Poet and soldier. Born Wilfred Edward Salter Owen, near Oswestry, Shropshire. In 1915 he enlisted in the Artists Rifles Officers' Training Corps, eventually being commissioned as a second lieutenant. After being blown up by a trench mortar, he was sent to Craiglockhart War Hospital in Edinburgh to revover from shell shock. It was here that he met Siegfried Sassoon, who became a great influence on him. He returned to the front and was killed in action during the crossing of the Sambre-Oise Canal.
His best known works include, 'Dulce et Decorum est', 'Anthem for Doomed Youth' and 'Spring Offensive'.

This section lists the memorials created by the subject on this page:
Wilfred Owen