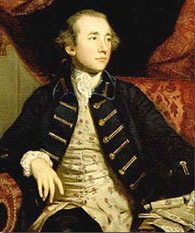 Born Oxfordshire. Joined the British East India Company as a clerk and rose to become the first Governor-General of Bengal 1773 - 85. Accused of corruption and the judicial killing of Maharaja Nandakumar, he was impeached in 1787. All explanations we can find of the situation make it sound convoluted and political. He was tried in Westminster Hall 1788 -95 and acquitted on all the charges.

Unlike other British administrators in India he had not brought home a fortune and was ruined by the impeachment. The East India Company did eventually rescue his finances and gave him a pension. His reputation did recover and in 1814 he was made a Privy Counsellor.

This section lists the memorials where the subject on this page is commemorated:
Warren Hastings

Treasurer of the Royal Household. Served Henry VIII and Elizabeth I. Father t...

Conservative politician. Wikipedia has the wonderful phrase "In 1947, he succ...