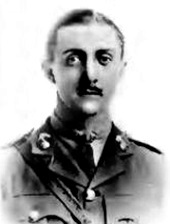 Soldier. Born Walter Napleton Stone in Blackheath. In WW1 he was an acting captain in the 3rd Battalion, The Royal Fusiliers, and whilst serving in the Cambrai Sector, France, he saw the German forces preparing to attack. Using a telephone, he transmitted information back to base until he was shot through the head. He was awarded the Victoria Cross for his bravery.

This section lists the memorials where the subject on this page is commemorated:
Walter Stone

{Beneath an image of a Victoria Cross medal:} Captain Walter Stone Royal Fusi...

Prominent theologian and first head of the Diocese of Sourozh, 1962 until his...

Artist who portrayed London during its 19th century developments. Born in Fra...