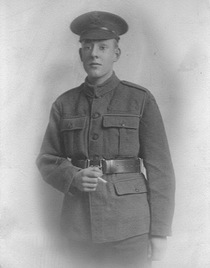 Auxiliary Fireman - one of two men (with L. W. G. Wilson) who gave their live...