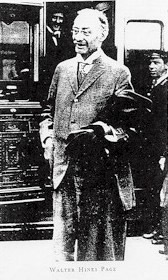 Yahoo! has "... Page was vice-president and partner of Doubeday, Page & Co, the largest publishing business in the English speaking world, printing books, magazines and periodicals. Page also wrote for the New York Post and The Atlantic magazine. In 1882 Page had shrewdly befriended Woodrow Wilson, when Wilson was just a lawyer with political ambitions, with Page championing Wilson in his newspaper articles and magazines. In March 1913 President Woodrow Wilson rewarded this loyalty by appointing Page to the post of US ambassador to the UK. ... Although Page was lobbied heavily by Prince Lichnowsky, the Kaiser’s ambassador to London, to help keep America out of the First World War, Page took an unabashedly pro-British stance and wrote articles in the New York Post and The Atlantic supporting America joining the war. In March 1917 a heavy Zeppelin raid on London triggered an outraged ambassador Page to write a detailed report to President Wilson and Congress about “German barbarism”; a month later the president and US Congress declared war on Germany.  In October 1918 Page became ill and was forced to resign his post as American Ambassador."

This section lists the memorials where the subject on this page is commemorated:
Walter Hines Page