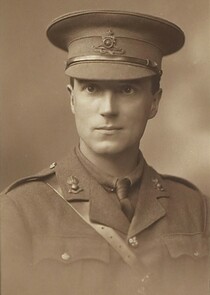 Major William Hammond Smith whose birth was registered in the 1st quarter of 1886 in the Cambridge registration district was a son of Charles Smith (1844-1916) and Annie Smith née Hopkins (1858-1944). His father was the Master of Sidney Sussex College, Cambridge.

Our picture source gives a biography of his life, listing his education at Tonbridge School, Kent and Blundell's School, Tiverton, Devon, together with his military service and the circumstances of his death.

Having attended St Faith's School, Cambridge, and Tonbridge School, Kent, the 1901 census shows him as a student, boarding at School House, Blundell's School, Tiverton. He was a Royal Academy Schools student from 26 January 1909 until December 1912 and in the 1911 census he is recorded as an artist (painter), living at The Master's Lodge, Sidney Sussex College, Cambridge, with his parents, his brother Sidney, his maternal great aunt Ann Eliza Hopkins (1831-1914), a cook, a housemaid and a parlour-maid.

Examples of his artistry, included that of a portrait of his father, are still on display at Sidney Sussex College.

He was killed in action, aged 31 years, on 17 April 1917 and was buried in Row B, Grave 9, in the Athies Communal Cemetery Extension, 5000F Rue d'Arras, Athies, France. Probate records show his address to have been 3 Belvoir Terrace, Cambridge and when administration was granted to his widowed mother his effects totalled £1,254-17s-10d. By 1 May 1918 she had also been sent his army effects totalling £206-11s-1d.

He was posthumously awarded the 1914-1915 Star, the British War Medal 1914-1918 and the Victory Medal to which was attached the Oak Leaf Emblem for being Mentioned in Despatches. These were sent to his mother in November 1924 to her address at 3 Belvoir Terrace, Trumpington Road, Cambridge.

He is also commemorated as one of the 159 former pupils of Blundell's School who were killed in WW1 on the set of stones on the northern side of the main school building, near the War Memorial Cross, on the memorial in All Saints' Church, Jesus Lane, Cambridge and on the Sidney Sussex College war memorial,

This section lists the memorials where the subject on this page is commemorated:
W. H. Smith

Lieut. The Hon. A. Kinnaird, MC