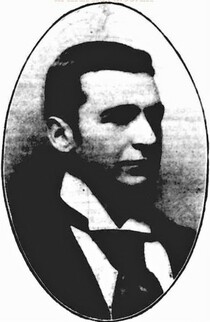 Born in Australia the son of an actress. Worked for Matcham for a time. Designed many famous London theatres, including the Notting Hill Gate Coronet (1898), Wyndhams (1899), the Albery (1903) and the Aldwych (1905).

Our colleague, Andrew Behan, says that despite the information about this man in our picture source claiming that he was born in 1863 in Ballarat, Victoria, Australia, in his census returns of 1891, 1901 and 1911 he claimed to have been born in New Zealand. Also, New Zealand birth registers show a William George Robert Spragg (sic) born there in 1865.

William George Robert Sprague married Mary Jane Beer (1867-1929) on 11 December 1890 at St John the Evangelist's Church, Brixton. The marriage register shows him as a 25-year-old architect living at 275 Cold Harbour Lane, Brixton, whilst his wife is recorded as aged 23 years of 15 King Street, Snow Hill, Holborn. His father was shown as William Sprague, deceased, whilst her father was called Isaac Beer, a provisions merchant.

In the 1891 census he is shown as an architect, living at 5 Alder Villas, Worple Road, Mortlake, with his wife and a female domestic servant. Their daughter, Maud Mary Sprague was born on 7 September 1891 and baptised on 7 October 1891 at St Mary's Church, Mortlake.

On 31 October 1898, giving his address as 13 Arundel Street, Strand, London, he petitioned the the High Court of Justice, Probate, Divorce and Admiralty Division, for a divorce, claiming that his wife had committed adultery with an Arthur Edward Lihme (1869-1928) at Garden Court House, Herne Hill, Surrey, from August 1897 to February 1898 and in the woods at Ravensbourne, Kent, during the months of April, May and June 1898. Additionally he claimed £2,000 in damages and custody of their child. He further alleged that his wife and Arthur Lihme had stayed together from 31 July 1896 to 15 August 1896 at West View, York Road, Sandown, Isle of Wight and again at the same place from 30 July 1897 to 16 August 1897.  On 23 November 1898 she denied the the allegation, as did Arthur Lihme. The case was held before a jury and on 9 June 1899 he was granted a decree nisi dissolving the marriage and was awarded £500 damages together with custody of his child. The final decree was granted on 18 December 1899. His ex-wife married Arthur Limhe in 1903 and they emigrated to the USA.

In the 2nd quarter of 1900 he married Isabel Kate Bennett in the Lambeth registration district and the 1901 census shows him as an architect living at 'Bungalow', Chestnut Avenue, Hampton, Middlesex, with his wife, whose occupation was recorded as a past manageress of a theatre, their daughter Amy Ida Sprague (1901-1985), together with a housemaid, a monthly nurse and a cook.

The 1911 census still shows him as a architect but now residing at 'Chez Nous', Marine Parade, Tankerton, Whitstable, Kent, with his wife, their two sons: Sidney William Sprague (1904--1985) and George Drummond Sprague (1907-1997), together with a domestic servant and a mother's help. Kelly's Directory of 1913 confirms him still at this address. Electoral registers from 1928 show him and his wife at 'Chepstow', Lockmead, Cookham, Maidenhead, Berkshire.

He died, aged 69 years, on 4 December 1933 and probate records confirm his home address remained as 'Chepstow', Lockmead, Cookham. Probate was granted to his widow on 22 January 1934 and his effects totalled £397-8s-8d.

This section lists the memorials where the subject on this page is commemorated:
W. G. R. Sprague

{Above a stylized picture of two performers:} Globe Theatre The third theatre...

Wyndham's Theatre was built for Mary Moore and Charles Wyndham in 1899. Arch...

The Duke of Monmouth obtained a site in Soho Square in 1681 on which the hous...