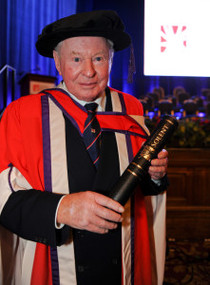 Served in the Royal Navy in 1944-8. Entered business and was the founding member of a highly successful business partnership that took over National Car Parks, which became the largest car parking company in Europe, maintaining a charitable relationship with the armed forces.

Vice-Admiral Sir Frederick Donald Gosling, KCVO, KStJ, was born on 2 March 1929, the son of Benjamin Gosling (1896-1964) and Maisie Gretchen V. Gosling née Benham (1904-2007). His birth was registered in the 1st quarter of 1929 in the Lambeth registration district and his father was a heavy lorry and coach driver.

In the 1939 England and Wales Register he was shown as a schoolboy, living at the home of William John Stacey and Lucy Stacey at Braughing Fields, Braughing, Ware, Hertfordshire.

He died following a short illness, aged 90 years, on 16 September 2019 in Kingston-upon-Thames. His Wikipedia page gives details of his life.

This section lists the memorials created by the subject on this page:
Vice-Admiral Sir Donald Gosling

Although the plaque does not specifiy we think the gate was used by the men a...

Founding Master of the Worshipful Company of Firefighters.  Buckingham Covers...