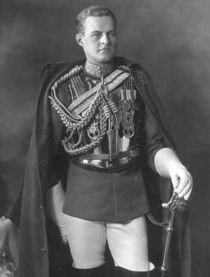 Known as Huttleston (and he sometimes spelt this as Huddleston - tut, these toffs, huh!).  Born Fairhaven, Massachusetts, eldest son of Urban Hanlon Broughton and his wife Cara.  Created 1st Baron Fairhaven in place of his father who died just before he could receive the honour himself. Inherited great wealth but did not marry.  With his brother, Henry, bought the Anglesey Abbey estate in 1926 (close to Newmarket where they spent lots more of their money).  The Baron filled the Abbey with expensive works of art and left it all to the National Trust.

This section lists the memorials where the subject on this page is commemorated:
Urban Huttleston Rogers Broughton, Lord Fairhaven