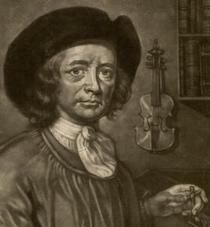 Held weekly concerts over his coal merchant's shop in Jerusalem Passage, from 1678. Important composers such as Pepusch and, it is also rumoured, Handel, paid visits to his musical evenings.

Popularly known as "the musical small-coal man". The weekly concert series continued for 36 years and he was befriended by members of the aristocracy, who came to the music room in the converted loft over his coal house to hear some of the great performers of the day. He was also a book collector and his contributions to British intellectual life were noted by such literary luminaries as Jonathan Swift and Horace Walpole.

Poet Matthew Prior, wrote the following after Britton’s death:
Tho’ doom’d to Small Coal, yet, to Arts ally’d,
Rich without Wealth and Famous without Pride,
Musick’s Best Patron, Judge of Books and Men,
Belov’d and Honour’d by Apollo’s Train;
In Greccae or Rome, sure never did appear
So Bright a Genius, in so dark a Sphere;
More of the Man had artfully been Sav’d,
Had Kneller painted and had Vertue Grav’d.

Born Northamptonshire. Died, according to legend, from shock generated by a practical joke: one of his (supposed) friends, a magistrate, employed a ventriloquist to assume the voice of God, commanding him to his knees. He died a few days later.

This section lists the memorials where the subject on this page is commemorated:
Thomas Britton