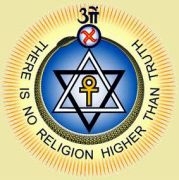 Formed in New York City by Helena Petrovna Blavatsky, Henry Steel Olcott, William Quan Judge and others. The society's initial objective was the study of Occultism, the Cabala and Eastern religions. Its seal incorporates the Swastika (in its original form as a sacred symbol), the Star of David, the Ankh, the Aum and the Ouroboros.

This section lists the memorials where the subject on this page is commemorated:
The Theosophical Society

The match girls strike of 1888 was led here by Annie Besant, journalist and l...

A non-political, non-sectarian, cultural and social organisation which promot...

Patrol leader in the 2nd Walworth scout troop, aged 12. Drowned in the traged...