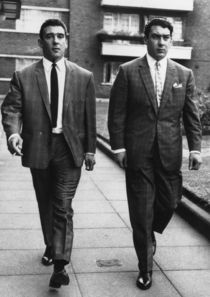 Twin brothers Ronald "Ronnie" Kray, 24 October 1933 - 17 March 1995, and Reginald "Reggie" Kray, 24 October 1933 - 1 October 2000. Violent East London gangsters with celebrity connections. Arrested in 1968 and convicted of murder they spent the rest of their lives in prison. Amazingly, from inside prison they ran Krayleigh Enterprises, a "lucrative bodyguard and 'protection' business for Hollywood stars" including Frank Sinatra who hired 18 bodyguards in 1985.

This section lists the memorials where the subject on this page is commemorated:
The Krays

Presumably set up with the sole objective of erecting the statue, we think th...

From Mamacolive: "Opened in 1993, The Garage quickly established itself as th...

Exists to remember, record and propagate among the wider British public the c...

Admiralty of the Maze

Admiraliteit Op de Maze, Dutch for Admiralty of the Maze, also known as the A...

Metropolitan Board of Works

Responsible for managing London's infrastructure, such as roads, sewage, etc....