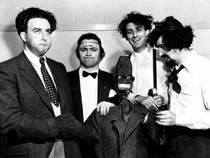 Radio comedy show, originally broadcast as 'Crazy People' The first scripts were co-written by Spike Milligan and Jimmy Grafton. The pressure of writing eventually contributed to Milligan's mental breakdown. Michael Bentine was a co-founder but left in 1953. The inventiveness of the programme has been cited as a major influence for many subsequent comedians. A puppet series for television, 'The Telegoons' was made in the early 1960s. Milligan, Secombe and Sellers reunited for a final show in 1972 as part of the BBC's 50th anniversary celebrations. Our picture shows, left to right: Sellers, Secombe, Milligan, Bentine.

This section lists the memorials where the subject on this page is commemorated:
The Goon Show