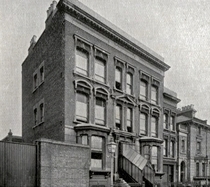 A Barnardo's home, also referred to as Sheppard's House. It was established around 1887 at 182 Grove Road, E3. Its address is sometimes given as 180 Grove Road, so may have expanded into the neighbouring property. Originally used for physically disabled boys, it was later used for children transferred from Barnardo's Babies' Castle. By 1900, the home housed up to 120 boys aged 6 to 12. It appears to have closed around 1912, with many of the boys being moved to the new Boys' Garden City at Woodford Bridge.

This section lists the memorials where the subject on this page is commemorated:
The Children's Fold

Devoted many years of his life to working with young people at Coram's Fields...