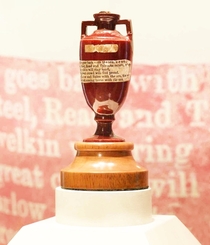 A test cricket series played between England and Australia. The name originated following a satirical obituary published in the British newspaper, The Sporting Times, after Australia's 1882 victory at The Oval, Australia's first Test win on English soil. It stated that English cricket had died, and 'the body will be cremated and the ashes taken to Australia'.
After England's victory in Australia the following year, a terracotta urn, believed to contain the ashes of a burnt cricket bail or ball, (or even the remains of a woman's veil), was given to Ivo Bligh, the captain of the England team. After his death, it was presented to the Marylebone Cricket Club, where it remains on permanent display at Lord's cricket ground.
The inscription on the urn reads:
"When Ivo goes back with the urn, the urn
Studds, Steel, Read and Tylecote return, return
The welkin will ring loud, the great crowd will feel proud
Seeing Barlow and Bates with the urn, the urn
And the rest coming home with the urn".

An Ashes series traditionally consists of five Tests, hosted in turn by England and Australia at least once every two years. There have been 71 Ashes series: Australia have won 33, England 32 and six series have been drawn.

The urn holding the ashes stays at the MCC museum at Lords. A larger replica in Waterford Crystal, known as the Ashes Trophy, is now physically awarded to the winning team instead.

This section lists the memorials where the subject on this page is commemorated:
The Ashes

Footballer. Born in Bow. He spent his entire career playing for Tottenham Hot...